This is before you got named ND nw8

However not the reason I needed it, just want a better bearing on where everything and everyone is at mapped in my head. Thank you Sam. Looking forward to an updated one with NW8 on it 👀:betsy:

Is the vetting server down? I'm getting a host error message

It's working now. Strange. Could've been on my end.

@ND - James TX it was down last night

A new storage for flagpoles and shields will need to be found after this coming demo. Alan needs to use that part of his house where he is keeping them

I reckon we can all find something more permanent and work together to do so. A large shed would be well worth the investment.

I would imagine @Thomas wants it back at HQ in Texas, but if not I think I could swing it at Ben MD (to be confirmed, if needed)

@ND - John WA Portland and Spokane are not in NW8. We have discussed this previously.

Some NW's are geographically larger, but that is due to flatter or unpopulated terrain.

@ND - Eric PA Considering the extant issues with effectively linking people all the way from Albany to Philadelphia, and also the fact that the current boundaries make X more populated than most other NW's combined, I think it's fine. If all that is left between 10 and 13 is a tiny sliver around Altoona, the possibility of an easy functioning NW across the Appalachians from the big metro areas is slim.

@ND - John WA You can't take all of them since I doubt you have that much carry-on space in the plane.

@ND - Eric PA @ND - Samuel VA I can make arrangements to transport the items back. I will see in what quantities and where, if any, items should be given to various areas able to return them via road. 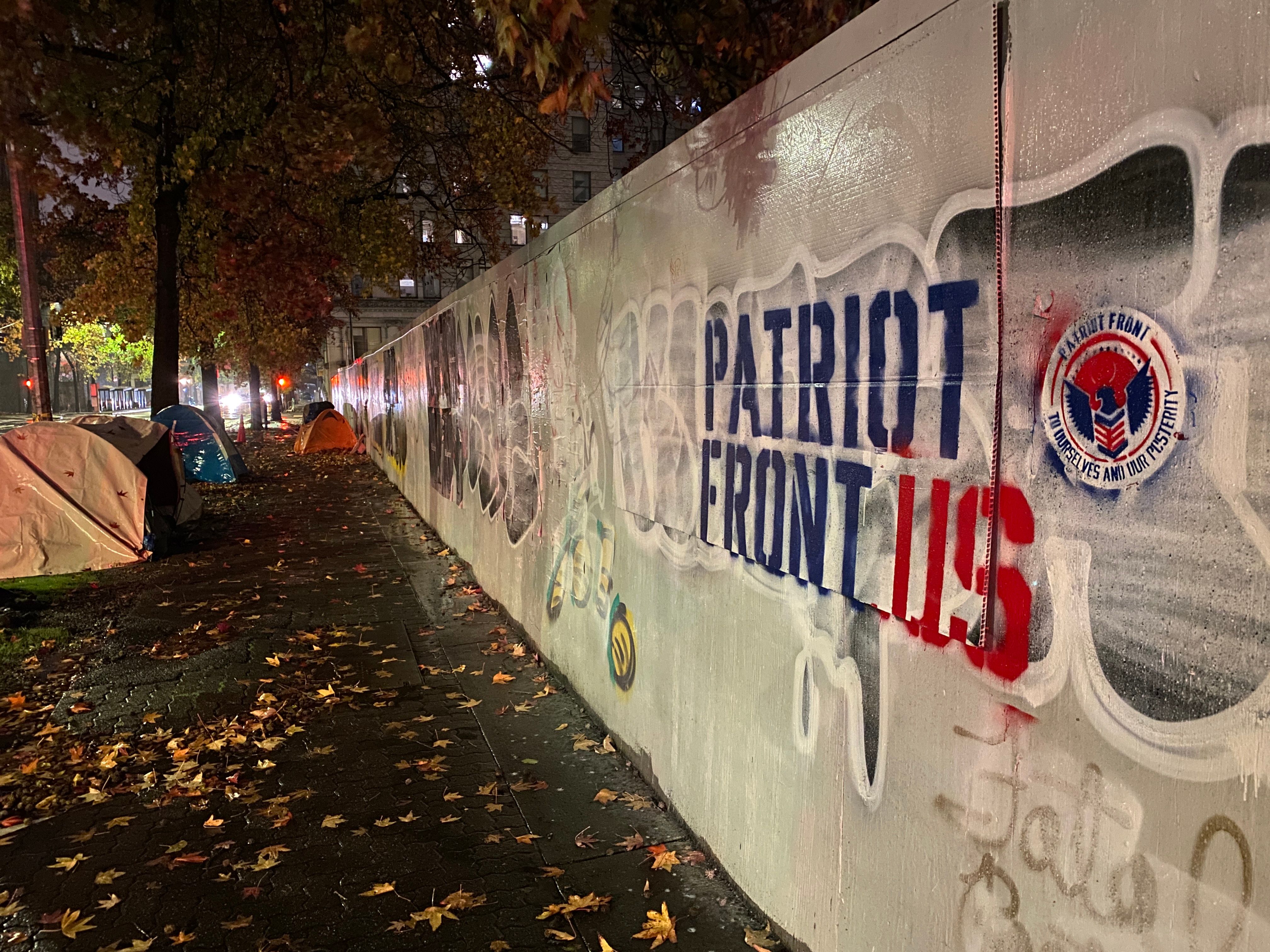 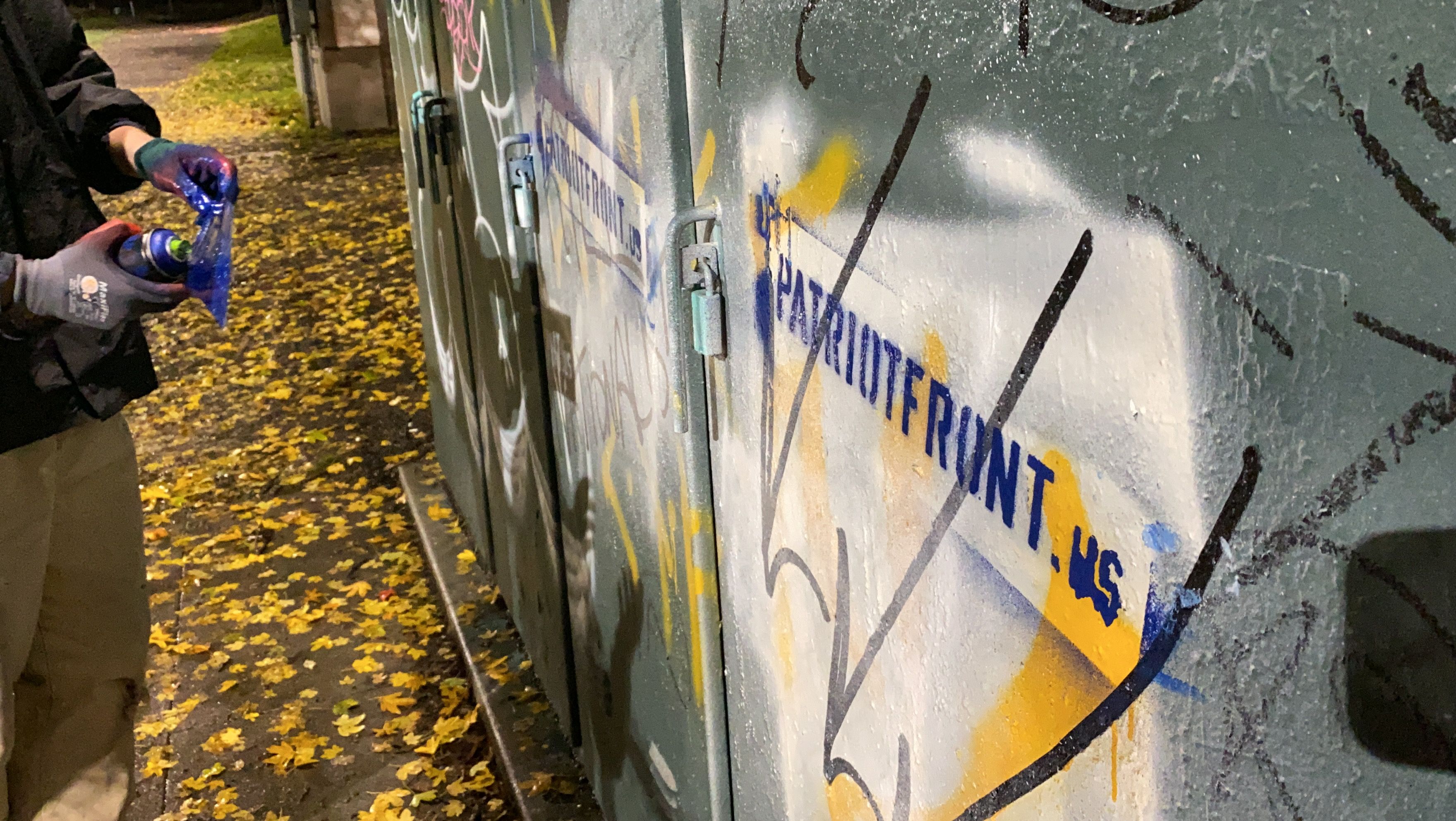 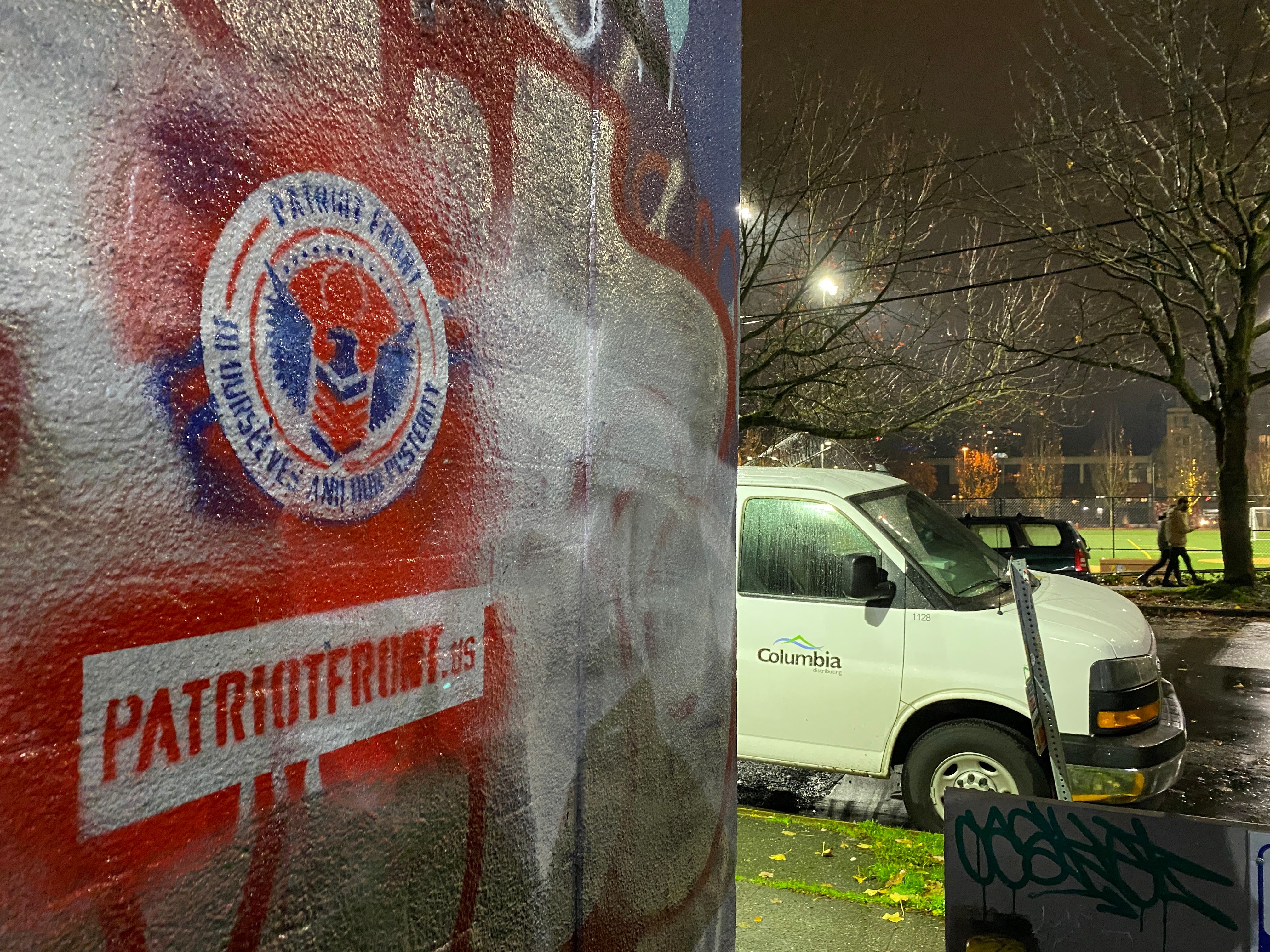 Stenciled in front of Seattle city hall plus former CHAZ zone Capitol Hill Seattle WA. The most left, and gay place in the whole state. On a Saturday night. 😎💪🏼

I think we did a total of 14 stencils around the Chaz and 6 of those big ones around the city hall of seattle. Gonna be a fun day on Twitter in the morning I reckon.

It was really busy too with all these gay bars open and antifa was even actively walking around doing their “nazi watch”. Did all of that right under their noses.

After last night though I’m going to get down on building some 1 foot stencils that fold up and fit in a backpack and we will make multiple slogans to use them. That coroplast and duct tape goes a long ways.

Youre doing a lot of great R/D on the stencils and I think that you need to export your findings for the rest of the org to take advantage of your knowledge at some point. I feel like nw9 has managed to get bannermaking down to a fine science, particularly when it comes to how to fasten it

I just haven’t yet because we’ve been running around with these giant pieces of material in the bed of my truck and most guys in the org can’t have that setup, so if we can make it more portable that would be great.

Also for banners we literally just poke zip ties through the banner. No grommets. No fasteners. No dope. No duct tape. It’s extremely fast. A banner drop should take no more than 3-5 minutes. That includes walking up to it. 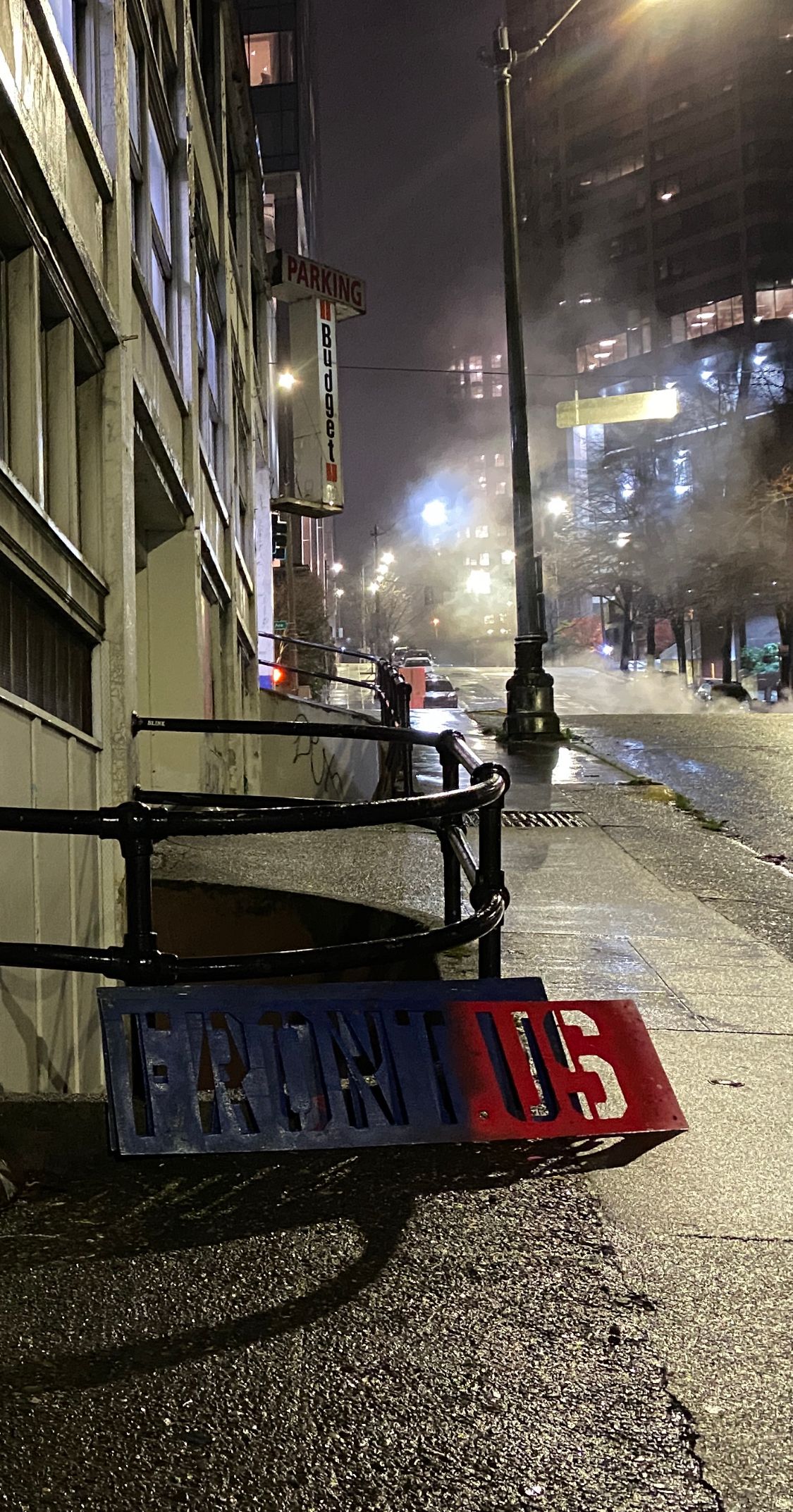 You can only run around carrying something like that in the city for so long before opposition smells you out.

Sam's got banners, John's got stencils, and I've got free sleeping.

@ND - Lawrence FL you’re the one who taught me how to stencil.

How does everyone else secure their banners? 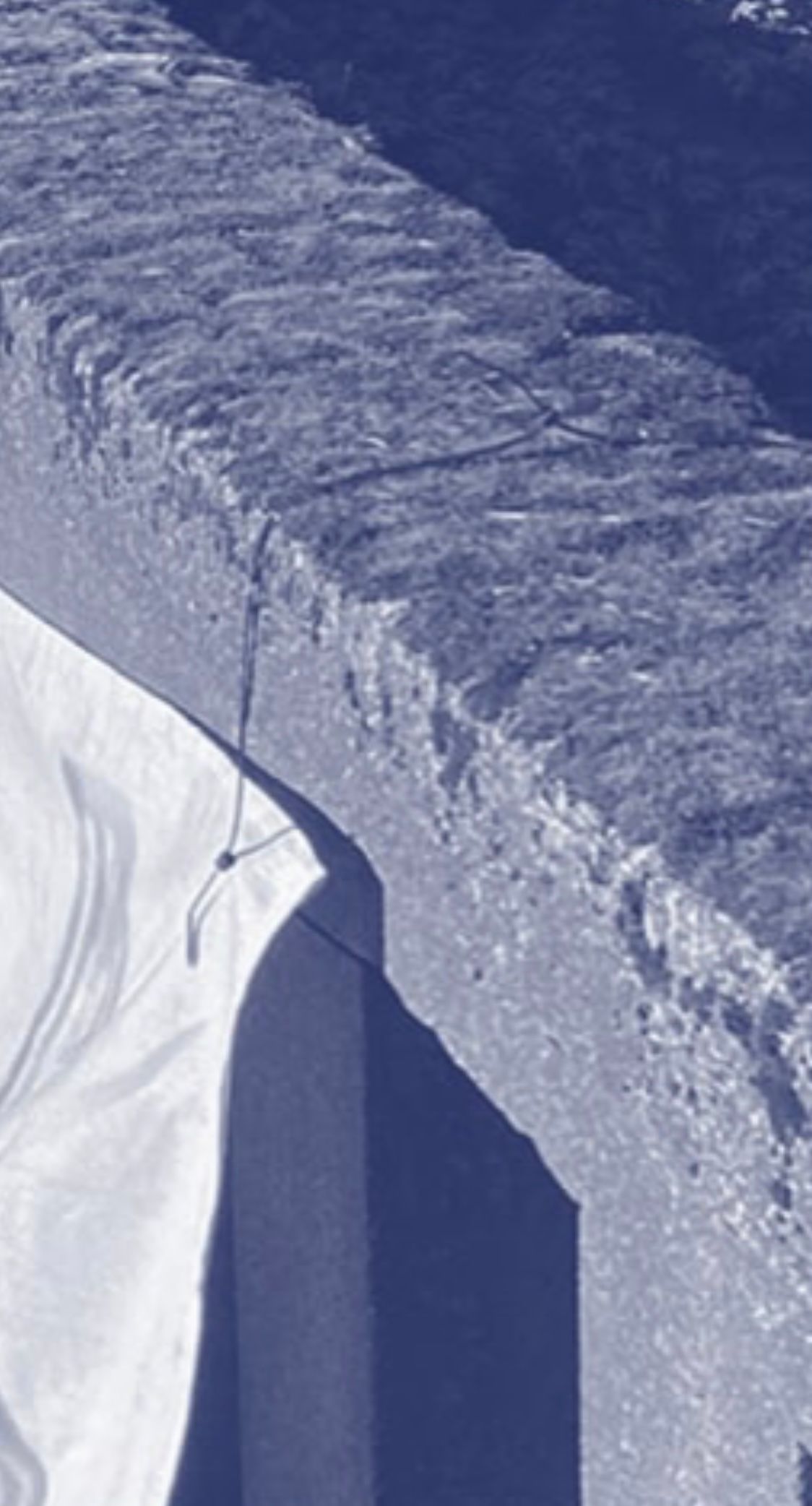 hold on I'm digging up photos

the top grommets we reinforce with white tape, notch a horizontal (not vertical) cut, and put a zip tie loop around it. We then connect
that loop and the chain link fence using a zip tie

we use these water bottles as weights, so we fling them over to weigh it down, but again the wind can sometimes be bad

I use a clothing hanger straightened out as a hook to fish the paracord connecting the water so it's butted up against the fence and taught down, then i'll use a ziptie to secure it in place

Bring 13 star flags and use those. Having the flags is good for photos and video, plus Patriot Karen type whites won’t call the police after seeing a group of strange men doing something out of the ordinary. Every flag guy is to wave at cars passing by. However pedestrian overpasses seem to be the hardest to go take down from drivers going under, and the most low key areas to do a banner drop.

What sheds are those letters?

it's comfortable for two lines of text + the URL, and depending on the wordiness we have a small toolbox of Icons to add on like the hammer sickle

Did you get the 18 inch with the projector method?

I really need to spend a weekend making mlre

Yessir I used the projector to make all our stencils; the best thing for you to do is to take a weekend with the boys as a "work" weekend to cut all new stencils you traced out on cardboard/coroplast and to make a big pile of banners. In NW9 we did 15 banners in one day with 6 guys, and we did a whole bunch of training, fitness, sparring etc. while we were at it. It was a good break from the constant run for activism and left us with a very nice stockpile that is lasting us for the moment

What is the projector method

I want to make a fresh set of stencils soon myself

i bought a projector and shoot the image against a wall, then I nail a piece of cardboard to the wall, trace the image with a sharpie marker and cut it out using a utility knife 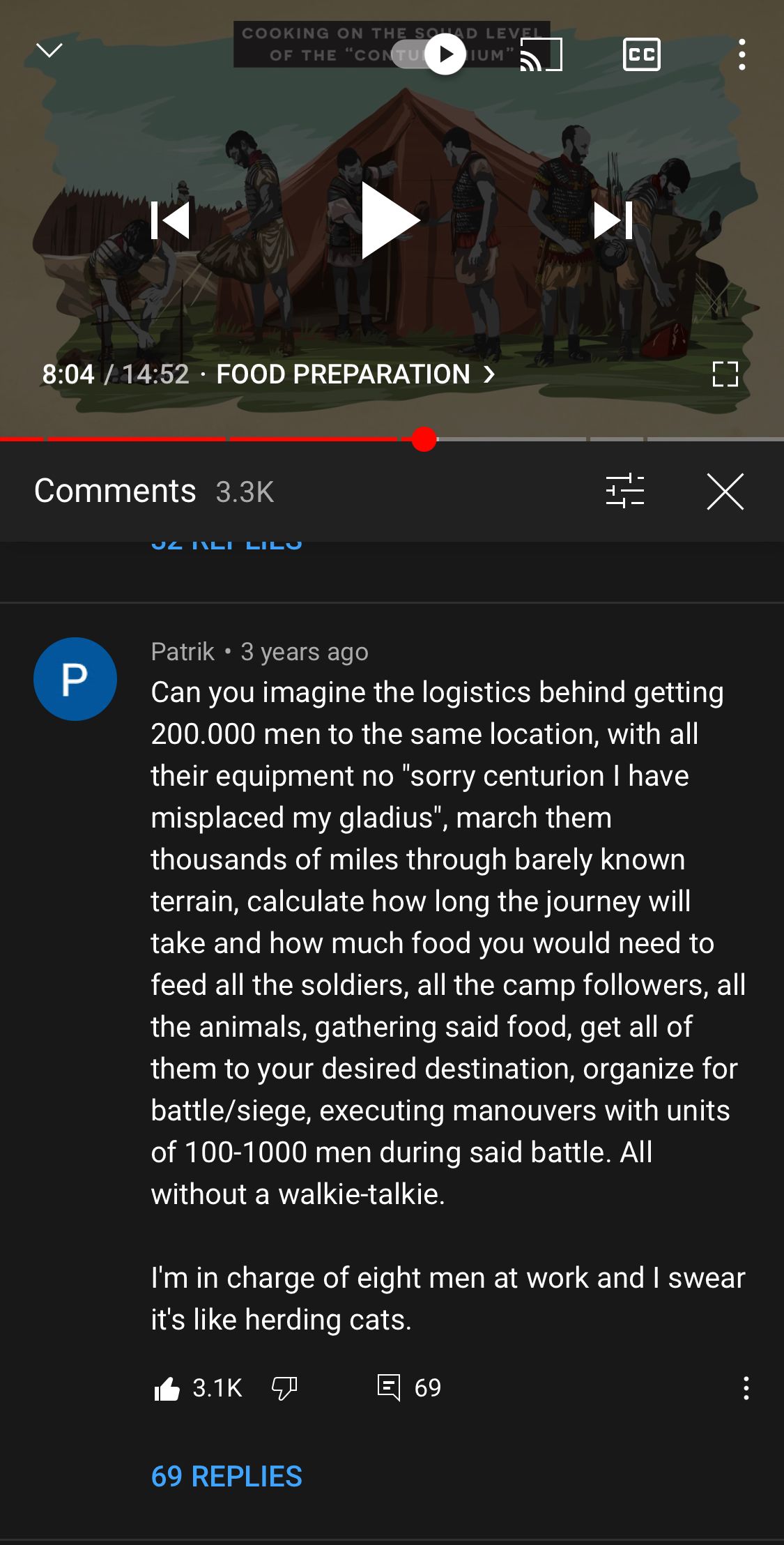 to play devil's advocate, the Roman's had a little-known motivational tool called "decimation" that was definitely a force multiplier when it came to effective organizing

Decimatio was only used in the most extreme cases, and thus it was rare. Remember, these soldiers were enlisted for 25 years and even after the Marian reforms they were enlisted for 10. They weren't replaceable cogs, they were professional, lifelong soldiers.

I think the most effective means for their organizing was payment, and then later it was citizenship. Land ownership, citizenship, loot. This is what they had to look forward to at the end of a decade or more of warfare and construction work. We run on revolutionary ideals. Our work fulfills our soul, but it is a net loss (right now) for our day to day lives and reputation. Luckily we will turn it around because we we are willing to impose ourselves onto the world and change it.

Tl;dr our organizing does not and it cannot emulate the Roman empire at this time

We are however closest to Romes foundation. However, I don't think things are so desperate that the Sabines or whichever group of women nearby need to be our wives whether they like it or not.

Hmmm I think I’ll add that to my leadership style

Oh you don’t want to do your activism this week? So you have chosen.. death.

Oh you don’t want to do your activism this week? So you have chosen.. death

It wouldn’t necessarily be him under decimation. Just the tenth man. Brutal

@Thomas apologies I didn’t mention this earlier but several round shields need new URLs, I noticed this when we were using them at our drilling event. I’m getting final inventory tomorrow so I can tell you the exact number

@ND - Eric PA Low on the list of priorities, but noted. Can you remove the colored tape from them, and repair any which are in lesser structural integrity?

@all Above is the gear list draft for December. Almost all of it is relatively unchanged from previous demonstrations.

Please review and let me know if you have any questions.

I was just coming in here to look for this.

The only changes are to due with weather and event fees. If any of you still have or remember lists from the last few demonstrations, then this should be extremely familiar.

This is good to be sent out now?

Unless you have any protests.

@here can someone please send me my threema ID so I can login. I haven’t used it since The Alamo demo.

@Thomas What general direction is the national from columbus Ohio? I need to know if I should refer @Gabriel WV to @ND - Eric PA @ND - Samuel VA or take him myself to the national.

Also the same with Francis PA