Little things like shirts or a pillow I wouldn't worry about.

Then someone else has it.

And my fav flannel

Not my fault you brought an expensive pillow.

There are more expensive things that got broken or lost at the event. Like cars.

Yeah both of mine were hit. I was at the vehicle exchange until 1:30am.

So concerns about a flannel can wait, I imagine. If it turns up, it turns up.

How did you get the SD card?

Who gave it to you?

Someone gave it to me. Saying it was left in a tent.

I think it has stuff from his work on there

I will look for it when I get a chance. Nothing other than finding the current leak is important right now.

They might know what happened to the rest of my stuff

I don't remember who gave it to me. Sorry.

Aside from the 130 people at the meeting.

Talk to Vincent and he will reach out to you if he needs something.

Leo OR snagged his phone after the march when I told him he wasn’t allowed to call his girlfriend. During all the fray.

We got back from the march and Leo asks to get his phone from the glove box to call his girlfriend because we’re all over the news and he wanted her to know he was okay. and I said no. So he goes and grabs it anyways and runs off to call her. One of my guys reported this to me. I was busy trying to get the situation with the cars under control. March was already over. Everyone was back at the exchange.

Leaving phones in the vehicles was too easy to snag phones.

It is good to know you did not stop him.

I told him no. He took it behind my back. Minutes later was reported to me. Sorry I wasn’t puppy guarding our phone basket.

Has Leo been doxxed at the moment?

Ah, well that should impress upon him the importance of the rules.

Yeah. I was actually going to threaten suspension after the demo if he didn’t shape up. Guys need to understand these guidelines are for their own safety, not because Thomas doesn’t like funsies.

Now is a good time to make sure they know that.

Sam and I will need the original profile pictures

Has Ethan been doxxed?

No. However I’ve met his toddler, his wife started crying thinking she was going to be doxxed next, and he rented our vehicles.

Judging by the full audio clip they have it was someone who joined the meeting early.

A good friend. I’ve seen his ID before. He’s very active. However he used to be tranny Antifa so he’s the only one I’d really suspect. However it wouldn’t be the first member we’ve had who was Antifa and or a tranny.

We can have Frederick vet him?

He’s 7 hours south of me

Keep him in mind.

Please keep the list of names to those under your purview.

Leo is re interviewing the Portland guy. Do I have permission to send him the new meeting intermediates document?

Outside. Hour south of Portland.

However I constantly manage him and Oregon so pretty much

NW's don't have "pretty much" boundaries.

Is Leo the absolute best equipped person to be doing vettings?

Jack is better but a bit further. He’s done several now. However Leo has interviewed the guy 2 times now.

Jack is Olympia are. Halfway between me and Portland.

Set something up with Jack.

“ I'm afraid I cannot participate in the organization anymore. I spoke with my father, and the only way I can prevent him from losing his job when I'm doxed is to leave. And if I feigned leaving and got caught a second time he'd 100% lose his career just by our relation alone. I apologize. There is much I am willing to risk, but the wellbeing of my family isn't one. Best of luck, sir. If I uncover the license plate number I will get it to you.”

Trying to say they saw us at the airport

He should at least wait. It is not belong them to bluff.

He hasn’t responded all day so idk what’s up

They said they understand his beliefs. He he needs to leave the org and his dad will lose his job and state police will search everything in the house

Think his dad is a state judge

Leo and Tyler are both keen on doubling down. Never capitulate.

Been sitting on this guys street all day now. Still no sign of him yet.

Don't do anything like that w/o coordinating w/ Vincent.

I have been no worries

I am going to move forward 781927, but I want to make sure that he's very carefully met and watched. Ideally with new people. He should be treated as if he's still being vetted. Sound good?

He will be under a microscope for awhile

He is @James OR 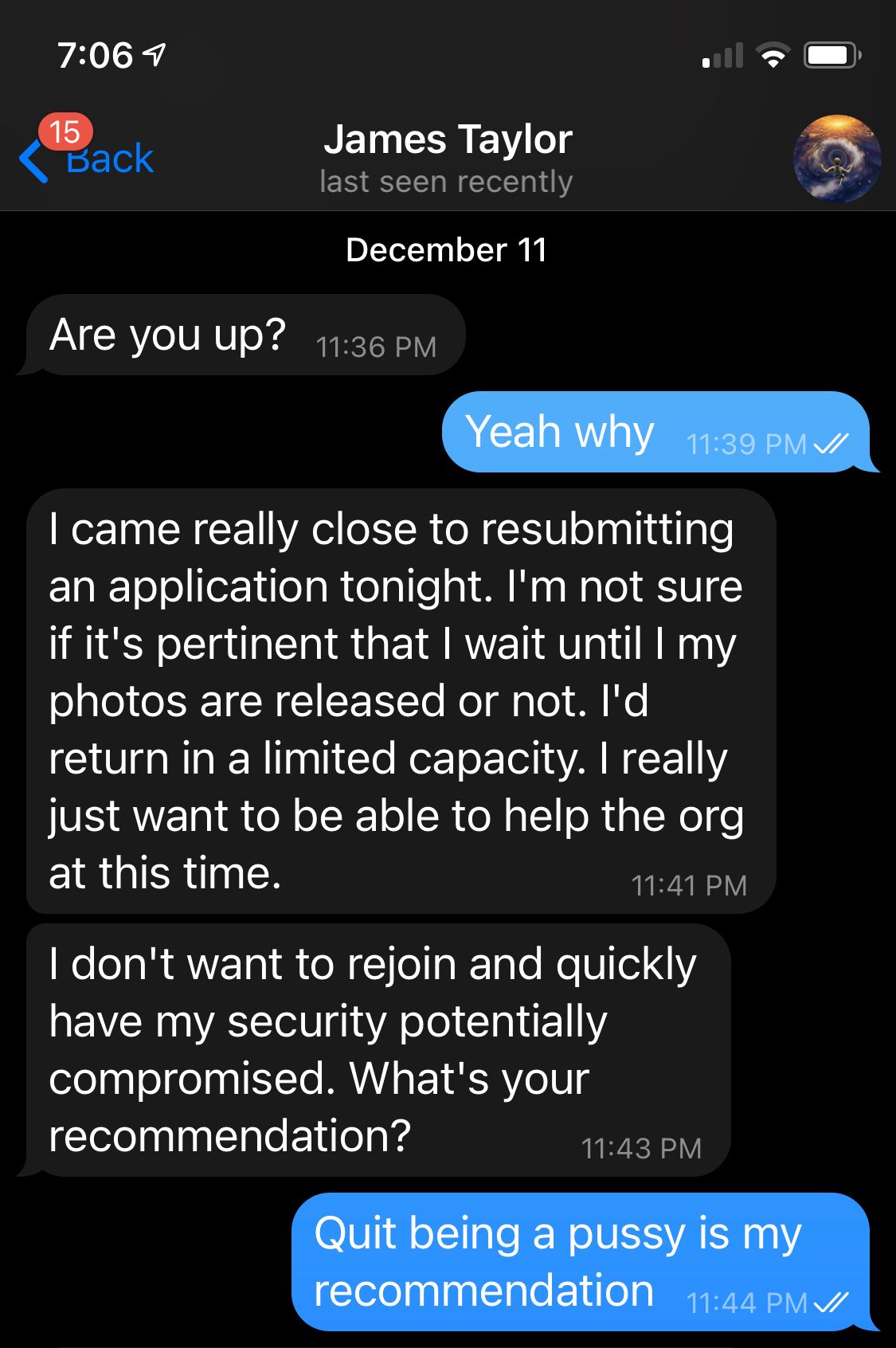 Is there any reason to believe he had his info taken? Just a picture isn't enough.

Just a picture of him

Unless Vinny has access to facial recog software that's a thousand miles away from anything anywhere, then he's fine.

My ex gf is Antifa and I’m still not doxxed. The hysteria of some people is shocking.

Tell him to give it two weeks. Nothing comes out, he's back. Even the slightest mention, and he can be a regular guy for the rest of his life.

With the chevron on it